Yamamoto Koji reveals how he got Horikita Maki to marry him 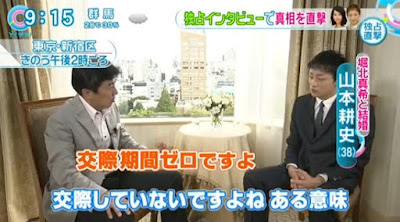 On August 24, Yamamoto Koji (38) gave an interview on Fuji TV's morning news program 'Tokudane!' detailing the 6-year journey from the time he met Horikita Maki (26) to their marriage on August 22.


They first met while filming for 2009 spring drama 'Atashinchi no Danshi' and he said he was taken in by her mental strength although she was only 20 or 21 years old at the time. He asked for her number and got it, but it was the number for her agency. 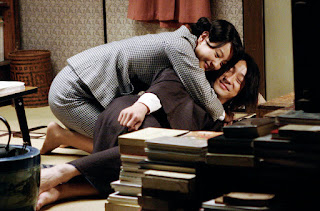 In 2010, they played husband and wife in 'Wagaya no Rekishi'. He was impressed with her strong skills as an actress and also charmed by how reserved she can be at times. On the last day of filming, he invited her out for drinks with everyone but she declined.

He did not give up. After that, whenever she had a stage play, he will go backstage to say hello and give her handwritten letters asking if maybe it was about time he could have her mail address but she never responded. (not in direct interview, off-camera & from Daily Sports Online)

In 2012, Horikita was filming for NHK Asadora 'Umechan Sensei' and Yamamoto just happened to be filming for NHK Taiga drama 'Taira no Kiyomori' in the studio next door. Everyday, still in his costume, he would drop by to see her until she actually said that he didn't have to anymore. (not in direct interview, off-camera & from Daily Sports Online) 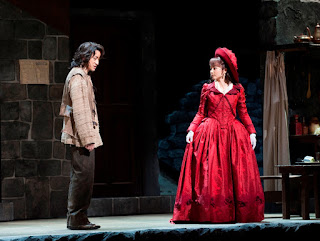 Then this year, they were cast to play Catherine and Heathcliff in the stage play 'Arashi ga Oka' (Wuthering Heights) which ran in May. He had a moment of doubt then if he was good enough. About halfway through the practice sessions, he started writing letters to her almost daily, adding up to about 40 letters in total. In them, he would ask how she was doing that day, or to let him know if she needed any help. The final one though, was essentially a love letter. She did not reply to any of them. 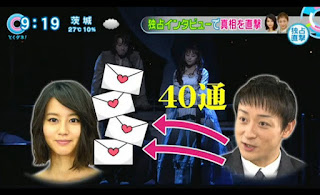 The play wrapped up and and he still did not have her number. In a last-ditch attempt, he asked her if he could at least let her have his contact information but he thought it was finally over.

That night, she contacted him on LINE.
'Otsukaresama deshita. Maki da yo.'
At first he thought it was a fake, but it was the real thing. 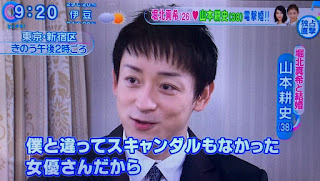 From there, they gradually started to share tidbits about themselves but he thought it couldn't progress if they didn't meet up. But unlike him, she was a scandal-free actress and he had to make sure it stayed that way. He also added that of course, she has not told him her home address.

Then, he got to know that Horikita was heading to Kyoto. Following his intuition, he got on the shinkansen at Tokyo Station. He thought that if she got on the same train, it would be a miracle or destiny. At that moment, he had with him a ring 'packed with all his emotions' as he described it. Then, at Shinagawa Station, Horikita actually boarded the train. He gave the ring to her and asked her, not to start dating him, but to marry him. He thought that if marriage was something important to her at that moment, he would get through to her heart if he said it. Apparently it did.

From there, the relationship progressed rapidly and they moved in together in early August. 5 days before they submitted their marriage registration, he wrote her another letter asking her to marry him. This time, she finally replied with 'Yoroshiku onegai shimasu'. (not in direct interview, off-camera & from Sanspo) 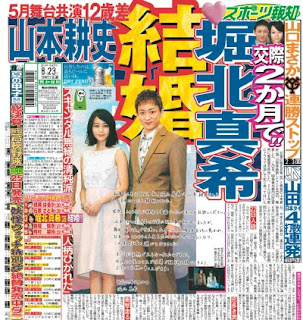